As the lower lid sags downward, the underlying conjunctiva is exposed. This forms a pouch or pocket, allowing pollens, grasses, dust, etc., to accumulate and rub against the sensitive conjunctiva. This is a consistent source of irritation in these dogs, leading to increased redness of the conjunctiva and occasional watering of the eye, which then spills out over the lower lid and face.

Many dogs live normal lives with ectropion. However, some develop repeated eye infections due to the collection of dirt, dust, etc., within the eye. Therefore, the risks are minor except in severe cases, where secondary eye infections may develop.

Some dogs require no treatment; however, if eye irritations develop, medical attention is advisable. Mild cases can be treated with eye drops or salves to alleviate irritations and/or infections when they occur. In severe cases, a surgical procedure is preferred, which removes excess tissues, thereby tightening the lids and removing the abnormal pocket.

Thanks to Gerlinde Janssens :

This is a condition in which the lower lid margins roll inward to the extent that hair rubs on the surface of the eyeball. In rare cases, the upper lid can also be affected to some degree. One or both eyes may be involved. This condition can occur in all breeds, however, Spaniels, Great Danes, Shar-Peis, Poodles, and Saint Bernards seem to be the most frequently affected breeds, suggesting an inherited trait.

What are the symptoms?

Most dogs with entropion will squint and have a reddened, inflamed eye. Because of the pain involved, dogs will scratch at the eye with a paw, possibly doing further damage. Examination of the lower eyelid will confirm the diagnosis 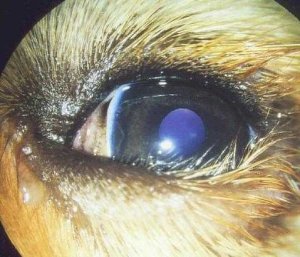 entropion with a golden retriever pup

Left untreated, severe eye infections may develop. The cornea can become severely irritated or damaged as the chronic abrasion by the inverted lower lid wears away at its surface. In some cases, deep ulcers form in the cornea, even to the point of rupturing through its surface. This quickly leads to intraocular infections and potential blindness.

Once diagnosed, surgery is the only treatment. There are several different techniques, but typically, a small incision is made below the lid, a small portion of skin is removed, and when the two sides of the incision are then sutured, it pulls the border of the lid downward into a normal position. Antibiotic ointments may be applied, if infections are present.

With more complicated cases, especially with damage of the cornea, the patient will get surgery.  There is a piece of skin that is taken away, close to the eye, so that this won't curl anymore.  This handling is being called Hotz-Celsius. Sometimes the eye itself is being reduced too.  This definitive operation is best being performed when the dog's head is mostly grown.  If the dog is showing signs of rubbing its paws against the eye or rubbing his eye aginst the floor, the dog can best ware a cap around the head after surgery.  After- treatment there is a cream prescribed with antibiotics and needs to be put in the eye and around 3 times a day.  The stitches will be removed after 10-12 days after surgery.

Some docters use stitches that remove out of their own. (resorble wire)

If the disorder is being diagnosed in a pup, then ther will not yet taken skin away but then there will be temporarely stitches being placed that will prevent curling of the eye, this is called “temporary tacking sutures”. Immediately after the surgery the slime membrane is very clearly present but mostly it disappears after a few days. Mostly the stitches are there for a couple of weeks.  Afterwards there are many options: or after removing the stitches the eyes won't curl anymore or there must be placed temporary stitches.  Or if the head id full grown and the curling remains than another surgery is being performed. 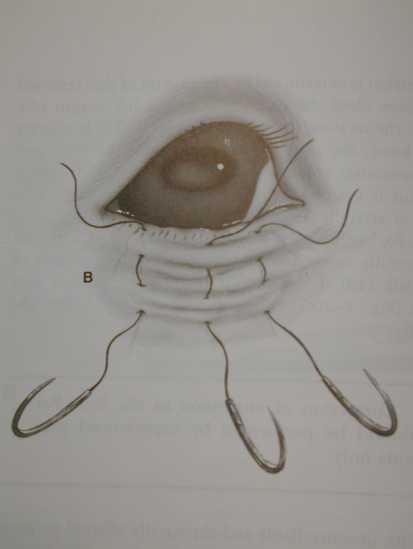 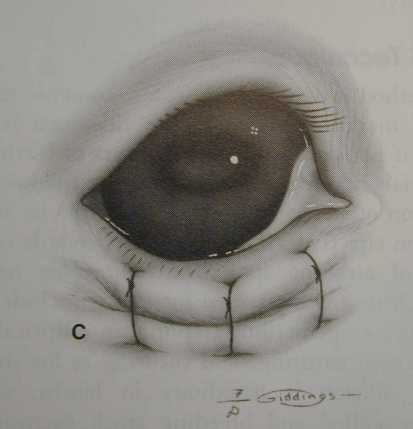 Occasionally, the third eyelid in dogs will fold over on itself, causing an eversion. Great Danes, Golden Retrievers, and Saint Bernards appear to have inherited traits for this condition, however, all breeds can be affected. The third eyelid contains a cartilage support structure that may be defective or injured, thus allowing the folding to occur. When this happens, the entire third eyelid will actually appear folded forward over on itself. Occasionally, the cornea can become irritated and an eye discharge may then be apparent. 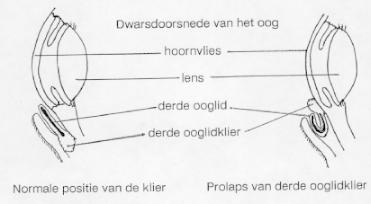 An everted third eyelid poses no great threat to health, except in rare instances where corneal irritation or infection develops. For both cosmetic and health reasons, most veterinarians recommend correction.

Eversion is corrected by surgery. The defective cartilage within the third eyelid is dissected and removed, allowing the lid to unfold and return to its normal position.

The medical term for 'cherry eye' is nictitans gland prolapse, or prolapse of the gland of the third eyelid. Unlike people, dogs have a 'third eyelid' that contains a tear gland and is located in the corner of each eye. Under normal circumstances, this gland is not visible and aids in the production of tears. For some reason, which is not completely understood, the gland of the third eyelid prolapses or comes out of its normal position and swells creating the condition known as cherry eye.

cherry eye with a pekinees

What dogs are likely to get cherry eye?

Any dog can develop cherry eye, but there are several breeds that appear to have a higher incidence of developing it in both eyes. They are: the Beagle, Bloodhound, Boston Terrier, Bulldog, Bull Terrier, Lhasa Apso, Saint Bernard, and Shar-Pei. Dogs can acquire this condition at any age and it affects males and females equally.

The exact cause of cherry eye is not known, but it is strongly suspected that it is due to a weakness of the connective tissue  that attaches the gland to the surrounding structures of the eye. The weakness of the connective tissue allows the gland to prolapse. Once the gland prolapses and is exposed to the dry air and irritants, it can become infected and/or begin to swell. The gland often becomes irritated, red, and swollen. There is sometimes a mucous discharge and if the animals rub or scratch at it, they can traumatize the gland further or possibly create an ulcer on the surface of the eye.

What is the treatment?

Treatment of cherry eye is very straightforward and consists of surgically repositioning the gland. Topical or injectable treatments of antibiotics and steroids are rarely effective in reducing the gland and allowing for correction without surgery. Because the exposed gland is at greater risk for further trauma or infection, prompt surgical replacement is the best choice.

before and after surgery of a mastino napolitano.

At one time, it was popular to surgically remove the gland as a way to correct this condition. While this procedure is often effective, it can create many problems later in the animals life. The gland of the third eyelid is very important for the production of tears. Without the tears produced by the third eyelid many dogs could suffer from the condition known as 'dry eye.' Dry eye or keratoconjunctivitis sicca (KCS) is a serious condition that results from the decreased production of tears. When the third eyelid gland is removed, we are greatly increasing the chances for the development of this condition. The much better and preferred surgical option is to surgically tack the gland back into place with a suture that attaches the gland to the deeper structures of the eye socket. Most of these surgeries are performed quickly and have very few complications, and allow the gland to return to normal function. After the surgery, some animals may need to be placed on antibiotic ointment for a few days.