What can you expect

Nowadays we can find this amazing breed anywhere around the world, even in hotter area's.  Their actual home base is in Northern Siberia.  Thousand of years they have been  the unmissable companions of the there living nomad's like the Tsjoektsjen.

The dogs helped with the hunting en pulled the sledges with their load towards home.   Dog sledges were the only way of transport for people there.  Winters in that area are long and cold with temperatures 40°C below zero are no exception in that country which is also coping with ice-cold storms.  The people are complete dependant of each other and the animals and they lead a sober life in ice and ice cold weather.

The dogs that we know now as 'Siberian Husky', were already formed by this bare country and his extreme weathers.  Their close coat with dense undercoat and somewhat tougher topcoat, the smallest well haired, standing ears, the bushy tail and the firm closed feet are some of the reasons why this dogs could survive in the north of Siberia.    Beside that the Tsjoektsjen did an import job together with other nomad's  to the development of this breed.  They selected very carefully their breeding dogs : only the dogs that had workability could reproduce.  Only a few selected male dogs could reproduce , the others had to be neutered of spayed.   In this way they could prevent fighting among the dogs.

By neutering the dogs they reduced the chance of injury in the sledge, in that time the dogs were still lead with the guidelines in between their legs.

The Tsjoekstjen took pregnant females or pups  into their houses as a play companion for their children.  That is why this breed developed in time (over 1000 of years) into a friendly dog and good pet dog.  The always curious,  energetic and undertaking dogs were very independent and are still today they have lack of the typical will to obedience and submittance.  They are still today work dogs with a great endurance and excellent way of orientating, a high intelligence and a remarkable memory. This last one can make them remember a road that they have once run years ago. (which can be very tricky in sledgedograces, if the direction of the race has change)

His triumph in Alaska :

At times of the gold rush the country of Alaska could only be reached by dog sledges.  No dog, even not the street dogs, could be sure that he would not be set in front of a sledge.

One of the most favorite spare time activities of the gold searchers was organizing sledgedograces.   One of them was the 'All Alaska Sweepstakes' in Nome, a 408 miles race.   In 1909 the first sledgedogteam of Siberia ran in it.  It got 3rd place.  With this the interest was woken up for these dogs, that first were mockingly called 'Siberian Rats'.   More dogs from Siberia were imported.  In the 3 years before the period that there no sledgedograces were held, because of World War I,  the imports from Siberia won time after time the 'All Alaska Sweepstakes'.  The successful musher  was Leonhard Seppala, a Norwegian gold searcher who's name is very close connected with the breed.

In a breed standard there is being a ideal view defined for the concerning breed.  The degree of recognition of a representant of the breed with the standard is deciding if the animal is good enough for breeding and if his litters will have a pedigree.

The first breed standard for the Siberian Husky was being published in 1930 by the Siberian Husky Club of America,  and at the AKC submitted.  In the mean time the standard has been adapted already a couple of times.  At the moment we are already at the 6th version.  It  has been recognized by the AKC in 1990 and with the FCI as standard nr 270 registered.  The FCI has the many different breeds divided into 10 groups and the Siberian Husky belongs to group 5  : division 1 Nordic Sledge dogs without work test.

Head : of medium size and in proportion to the body; slightly rounded on top and tapering from the widest point to the eyes. Faults--Head clumsy or heavy; head too finely chiseled. Stop--The stop is well-defined and the bridge of the nose is straight from the stop to the tip. Fault--Insufficient stop. Muzzle of medium length; that is, the distance from the tip of the nose to the stop is equal to the distance from the stop to the occiput. The muzzle is of medium width, tapering gradually to the nose, with the tip neither pointed nor square. Faults Muzzle either too snipy or too coarse; muzzle too short or too long. Nose black in gray, tan or black dogs; liver in copper dogs; may be flesh-colored in pure white dogs. The pink-streaked "snow nose" is acceptable. Lips are well pigmented and close fitting.

Eyes : almond shaped, moderately spaced and set a trifle obliquely. Eyes may be brown or blue in color; one of each or parti-colored are acceptable. All colours are allowed like green, hazelnut, yellow,... even a colour with a spot of an other colour in. (for example blue with a spot of brown)  Faults--Eyes set too obliquely; set too close together..

Ears : small to medium size, triangular in shape, close fitting and set high on the head. They are thick, well furred, slightly arched at the back, and strongly erect, with slightly rounded tips pointing straight up. Faults--Ears too large in proportion to the head; too wide set; not strongly erect.

Neck : medium in length, arched and carried proudly erect when dog is standing. When moving at a trot, the neck is extended so that the head is carried slightly forward. Faults--Neck too short and thick; neck too long. Chest deep and strong, but not too broad, with the deepest point being just behind and level with the elbows. The ribs are well sprung from the spine but flattened on the sides to allow for freedom of action. Faults--Chest too broad; "barrel ribs"; ribs too flat or weak. Back--The back is straight and strong, with a level topline from withers to croup. It is of medium length, neither cobby nor slack from excessive length. The loin is taut and lean, narrower than the rib cage, and with a slight tuck-up. The croup slopes away from the spine at an angle, but never so steeply as to restrict the rearward thrust of the hind legs. Faults--Weak or slack back; roached back; sloping topline.

Body : the back has to be strong, straight and moderate in length. The dog is squarely build. The chest has to be deep, long en not to wide.

Shoulders--The shoulder blade is well laid back. The upper arm angles slightly backward from point of shoulder to elbow, and is never perpendicular to the ground. The muscles and ligaments holding the shoulder to the rib cage are firm and well developed. Faults--Straight shoulders; loose shoulders. Forelegs--When standing and viewed from the front, the legs are moderately spaced, parallel and straight, with the elbows close to the body and turned neither in nor out. Viewed from the side, pasterns are slightly slanted, with the pastern joint strong, but flexible. Bone is substantial but never heavy. Length of the leg from elbow to ground is slightly more than the distance from the elbow to the top of withers. Dewclaws on forelegs may be removed. Faults--Weak pasterns; too heavy bone; too narrow or too wide in the front; out at the elbows. Feet oval in shape but not long. The paws are medium in size, compact and well furred between the toes and pads. The pads are tough and thickly cushioned. The paws neither turn in nor out when the dog is in natural stance. Faults--Soft or splayed toes; paws too large and clumsy; paws too small and delicate; toeing in or out.

When standing and viewed from the rear, the hind legs are moderately spaced and parallel. The upper thighs are well muscled and powerful, the stifles well bent, the hock joint well-defined and set low to the ground. Dewclaws, if any, are to be removed. Faults--Straight stifles, cow-hocks, too narrow or too wide in the rear.

feet: oval but not too long, with strong tuff soles.

Tale : just set on under the backline, is being held down or when the dog is active or attending in a bow over the back. The tail is richly haired.

Gait : The movements are fluent, light and seems to obtain no effort, but are at the same time effective and wide.

Coat: double, which means close undercoat with topcoat. the dog must give a well haired impression, but the coat may not be that long that the outlines of the dog are fading.

Allowed Masks :(signs on the head) : 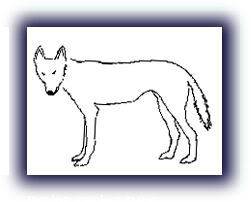 The show Siberian is a Siberian that is often used for dogshowing to show of his beauty. This type of Siberian is often also a petdog, they have shorter legs, are heavier and more gracefull They are more full of body, larger head shorter and wider mussle and a thick tail . Colors in this type can be all kinds and we often see the typical markings on the head , white legs and belly and white tailpoint. (bv Belle, Danika) 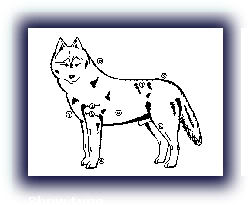 The type of Siberians you see the most as petdog, they are not that heavy as a show siberian and fuller then a sprint siberian.  The belly line is more atletic meaning that it is not like the show type a straight line but has more of a rounding around the chestarea.  (this type i always aim for) 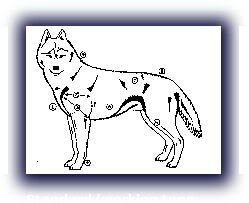